Between sleep and wakefulness, ten hours and forty four minutes is a hard journey in the Badulla bound night mail train, as we passed the Watagoda Station. This is the only railway station with two platforms on the up country railway line.

Our destination was the No 61 Railway Station, the Great Western (GW), one of the most beautiful stations in the hill country.

When we reached our destination at 6.44 am the weather was perfect for a hike. We patiently waited till we witnessed the morning rays brightening the mountain tops giving us a panoramic view of the area.

After a cup of tea at Morgan’s Place, we started our journey sharp at 8.10 am. The GW mountain hiking path is nearly five kilometres from the Station.

We travelled a short distance (about 1.5 km) along the railway line and took 24 minutes to reach the iron bridge. The starting point of the hike to the seventh highest mountain in the country, is just before the bridge on the left hand side (In the mountains List the Great Western was placed as the 6th highest, but with the Agra Bopath entering the List it slipped one step down). The trail began with concrete steps reaching to a seventy year old Hindu Kovil hidden in the jungle.

These steps tell the story of a man who had lost his way home and had made a vow to the Paththini Amma goddess seeking her help to find his way. He was then surprisingly able to find his way down to the rail track where the steps began. He then climbed the steps and made it to the top as a gesture of gratitude to the goddess. As is the custom, we performed religious rituals before entering the main track. Our crew consisted of 17 members including one female.

A tiny stream flows down the left side of the Kovil, along which the path reaches the forest patch. We walked in single file through the bushes, until we reached the top.

The thick rainforest formed a canopy above us and the rich bio-diversity of the area was a welcome sight. The landscape winding through the dense forest region allows you to explore the true beauty of the mountain rainforest.

Although we saw some birds they didn’t break the silence of the area with their songs.

Wild boar and fishing cats are the permanent residents of this forest, surprisingly though, the regular leaches were not to be seen. A few hours into the journey brought us to a small stream, two to three feet wide, and we decided to fill our bottles with pure cold water as this would be the second and last water source we would meet on our way to the summit. Walking on for a few more hours we reached a plateau with many rocks which looked like a camping site.

We took our first break here, munching biscuits and taking in the scenic beauty of the area.

We used a rope to climb the steep terrain. Even though the terrain was not wet we had to use the rope as the steep was a 60 degree climb.

When we glimpsed at the mountain top through the tree canopy we realized we were in the vicinity of the mountain. The trek became tougher than we thought, and it was hard to climb without the support of the branches or holding on to one another. The next steps were the most exciting and adventurous part of the journey. The track lined the edge of the mountain and on the left side was a steep cliff running down more than a thousand feet to the bottom of the forest.

We managed to pass the dangerous part of the journey and after five hours, reached the first view point, at 1.10 pm to be exact, at an altitude of 2,054 m above mean sea level.

The magnificent 180 degree wide angle portrayed a breathtaking scenery. The Podi Menike was traversing the huge bend to pass the Iron Bridge to reach the GW Station before the Udarata Menike reaches the Station.

The summit stood tall on our right, beckoning us to reach it. On the rear was a greenish endless mountain forest, a colorful sight, mixed with yellow and light red. No winds blew to embrace our sweating bodies nor to sway the trees, which looked like stone pillars.

After a short break we started on the last lap of our journey entering the Pigmy forests. As we ascended we had to creep through the forest canopy, which was not more than 3-4 feet high. To enhance the beauty of the forest, blue and white tiny flowers coated the green canopy. For a moment we felt we were lost in a flower garden.

We could reach the 7th highest mountain, the Great Western summit, 2,201 m above mean sea level, within 25 minutes amid all the danger and excitement. On the top of the summit, a few footpaths were visible, running in different directions. The straightforward path goes to the third view point, which is a wide open rocky surface. The left side ends at the second view point. The southern area captures the holy mountain of Sri Pada, Seven Virgins, Kirigalpotta and Totupola Kanda on the Horton Plains, while on the left is Radella and Uda Radella. The Railway Station stood isolated. We were disappointed that we missed best opportunity to view from this point the spectacular scenes of Podi Menike and Udarata Menike meeting each other on their long journey.

Suddenly, the whole area was enveloped by a thick mist, obstructing our view. We felt a cool breeze as the dark rain clouds emerged over the sky warning us of our next challenge.

We sat on the 2,201m high mountain summit to have lunch, a light meat of noodles. The slight drizzle turned into a shower and suddenly, it started raining cats and dogs. It was 2.37 pm and we decided to descend without having lunch. The path we had used to climb had become a muddy field now.

Some of our crew stumbled, slipping in the mud and losing their grip. In the thick mist covered, dark forest, a false footpath led us in the wrong direction. We went through the sound of water to fill our empty bottles.

Finally, we reached the small stream and continued towards the Kovil premises around 10.30 a.m. We came out of the forest, completing a most adventurous and unforgettable journey. 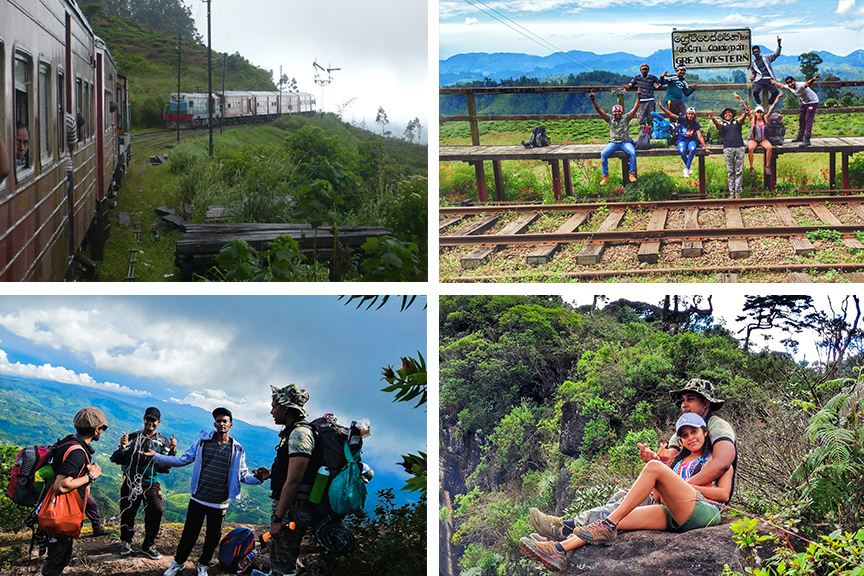