Ambuluwawa is a biodiversity complex and Sri Lanka's first multi-religious sanctuary situated in the central highlands of the country.

Ambuluwawa is a biodiversity complex and Sri Lanka’s first multi-religious sanctuary situated in the central highlands of the country. The Ambuluwawa Trigonometrical Station, in Gampola, consists of large winding tower resembling a stylized Buddhist stupa, a Hindu kovil, a Muslim mosque and a Christian Church. It is situated about 5 km from Gampola’s town centre.

Reaching the top of Ambuluwawa one can experience the most amazing views which could sometimes be covered by the ongoing mist. However, once the mist clears off the view can be scary and freak out climbers, especially those who have a fear of heights. Do note that hiking Ambuluwawa is not at all dangerous or risky, but it would not be the ideal kind of adventure for those with a fear of heights. Avoid leaning on the railing to capture photographs especially at the top as this is extremely risky and one could easily slip off from here. Ambuluwawa is a relatively easy hike to do which gives you 360 degree views of the surrounding mountains, forests, rivers and towns.

It is an area richly diverse, with evergreen forests, blossomed flower plants as well creepers and about 200 different kinds of plants from 80 plant families including a variety of medicinal plants. Ambuluwawa is surrounded by many mountains including Piduruthalagala from the East, Bible Rock (Bathalegala) from the West, Sri Pada (Adam’s Peak) from the South and Knuckles Mountain Range from the North. Apart from these mountains many other mountains are also clearly visible from here and adds to the beauty of the area. These are the Hanthana Mountain Range, Hunnasigiri Mountain and mountain ranges associated with Algalla and Kadugannawa. There is a cool mountain breeze in the area due to this reason.

The Ambuluwawa Hill and the adjacent forest is designated as a forest reservation which is named as the Ambuluwawa ICC Forest Reservation. The history of the Ambuluwawa Temple dates back to the 13th century during the reign of King Buwanekabahu IV. It is said that the Ambuluwawa Peak was the center of the Gampola Kingdom during his reign. But there is nothing with historical or archaeological values in here.

Ambuluwawa is situated approximately 1,965 feet from the level of Gampola town. The Ambuluwawa Mountain stands approximately 3560 meters above sea level. The tower stands at a height of approximately 48 meters and the elderly and kids are not recommended to climb to the top of it. The mountain road runs along the serpentine surrounded by mountain landscapes, cliffs and unique plants, which cannot be found anywhere else. Interesting places to visit include three ponds, a sacred Bodhi tree, water Park, stone Park and garden of herbs.

The Ambuluwawa Biodiversity Center was inaugurated by Sri Lanka’s former Prime Minister, Dissanayake Mudiyanselage Jayaratne, popularly known as “Di Mu”, who was born near Gampola. For those going from Colombo, Ambuluwawa is situated 85 km from the capital city. 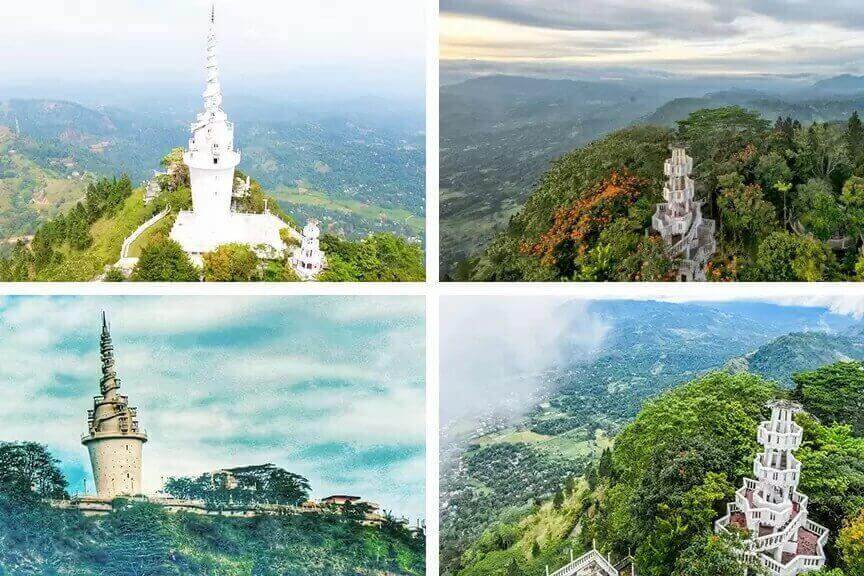 From Kandy take the Colombo – Kandy Road and go past Peradeniya and Gelioya up until you reach Gampola. Take the Ambuluwawa ICC Road to reach Ambuluwawa Trigonometrical Station.

A Study was carried out in this forest from 23rd January to 20th February 2003 by the University of Sri Jayawadenepura, Sri Lanka in which 29 endemic species were found in the Ambuluwawa Mountain.

The total number is 126 species.